I have known and worked with German Luthier Dieter Müller for more than ten years now. Initially we worked together with his solid top guitars, but we have redirected our focus such that now we are exclusively working with his Dammann-like double top instruments. 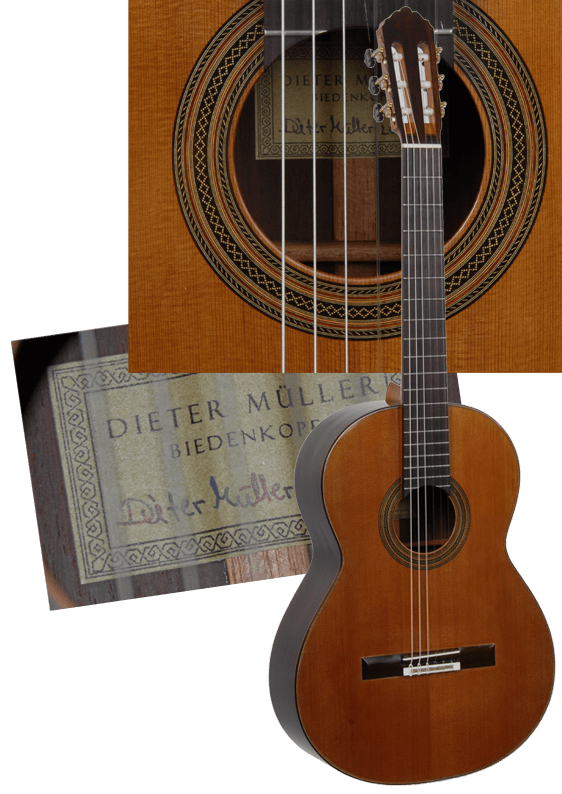 I have had the pleasure of playing more Dammann guitars, and more double tops, than most anybody in the world (yes I DO love my job!) and in doing so I have really been able to ascertain those builders who have set themselves apart and who have expended the years of experimentation and trial and error that is required to ultimately achieve a fine double top instrument. Dieter is one of those rare builders who has unlocked the secrets of the double top guitar in this way.

Dieter builds in Germany and was not only interested in music (he took up both the violin and guitar at an early age) but also in scientific research. He studied physics at the renowned Marburg University. This blended background, of science and music, became the fertile reservoir from which Dieter’s double top guitars would emerge. An accomplished player, with a penchant for detail and traditional hand crafted style, and a firm understanding of physics, Dieter experimented relentlessly constantly refining his instruments into what they are today. His influences range from prominent German Luthiers, to A.Torres, Robert Ruck, and of course Matthias Dammann. In fact some very fine guitars by Matthias Dammann, who also generously shared ideas and theories with Dieter, remain his strongest influences. He quite successfully combines the rich, warm, dark, round tonal character of the old traditional Spanish guitars with the great volume and easy, even response of the best modern concert instruments. His guitars are extremely powerful and feature a light weight double top construction combined with Torres style bracing and very careful resonance frequency tuning. Being a fine player himself,

Dieter does his best to make life easy for his fellow guitarists: his guitars are very easy to play technically, and they also respond like they have an inbuilt desire to start singing in a way that is almost eager to be unleashed and to reward the player. Stephan Schmidt’s recording of Bach’s lute music has received rave reviews and was recorded using a Dieter Müller ten string. Schmidt also owns two fine double tops, a Matthias Dammann, and, you guessed it, a Dieter Müller.

I am very proud to offer Dieter’s guitars to my clients as his exclusive US Representative.